PICTURE
GALLERY
Please enjoy viewing some of my drawings

(and one by our daughter, Shira).

(full size of all pictures is A4)

Traditional image of the Chofetz Chaim ztz”l
– Rabbi Yisroel Meir Kagan –
Author of 21 seforim, including Sefer Chofetz Chaim (an organised and clear presentation of the laws regarding harmful speech), Sefer Shemiras Haloshon (guidance on guarding one’s tongue, based on teachings of our Sages), and the Mishnah Berurah (his commentary on the Orach Chaim section of the Shulchan Aruch, which deals with daily laws for a Jew; the Mishnah Berurah became a standard source of Halochoh for Ashkenazim).

I drew this from a screen capture of this wonderful archive film that contains actual rare footage of the Chofetz Chaim at the First Knessia Gedolah of Agudas Yisroel, Vienna ~ August 1923.

The Chofetz Chaim appears at 0:57.

Rabbi Aryeh Levin ztz”l
Known as the
“The Tzaddik of Jerusalem” and
“Father of Prisoners”
because of his visits to prisoners and work on behalf of the poor and sick. 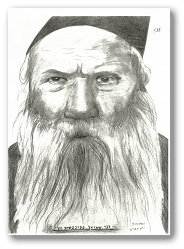 The Shem MiShmuel ztz”l
– Rabbi Shmuel Bornsztain –
The second Sochatchover Rebbe
He was known as the Shem Mishmuel because this was the title of his nine-volume work of chassidic thought on the Torah (vols.1-8)
and Haggodoh (vol.9).

Rabbi Ovadia Yosef ztz”l was one of the greatest Torah leaders of the generation.  He wrote many seforim of halachic responsa.  Maran Hacham Ovadia held a number of leadership positions, including Dayan on the Jerusalem Bet Din, member of the Supreme Rabbinical Court of Appeals in Jerusalem, Sefardic Chief Rabbi of Tel Aviv and Sefardic Chief Rabbi of Israel.  He set himself a life mission of restoring the primacy of Halachah among Sefardic communities, a goal that he achieved with great success.

Isaac (Issy) Simons a”h.
Issy Simons was my wife’s
maternal grandfather.
He was the Shamas of Sheffield’s Wilson Road Synagogue for many years, and ran the Chevra Kadisha.  Issy also supervised shechita in the abattoir.  I never met him, but I can tell from the memories I have heard that he was a lovely, popular man and a great character, who was devoted to family and community.

A portrait drawn by our daughter, Shira ‘תח

Rabbi Matisyahu Salomon shlit”a, the mashgiach ruchani of the Beth Medrash Govoha Yeshiva in Lakewood, New Jersey, United States.  Rav Salomon was mashgiach ruchani of Gateshead Yeshiva for more than 30 years. He was mashgiach in Gateshead Yeshiva initially under Rabbi Moshe Schwab and then as the senior mashgiach, before moving to Lakewood in the spring of 1998.  Since Rabbi Matisyahu Salomon is a disciple of Rabbi Eliyahu Lopian ztz”l, he follows the Kelm mussar school philosophy.

One of my ketubot.  I wrote and illustrated this ketubah.

(It’s much larger than this!)

This is the new website of torahschool.co.uk. Kodesh teachers around the world have been finding useful resources on TorahSchool since 2001. Now these same resources are becoming available here, in this clean, bright space…and some great, new material too!